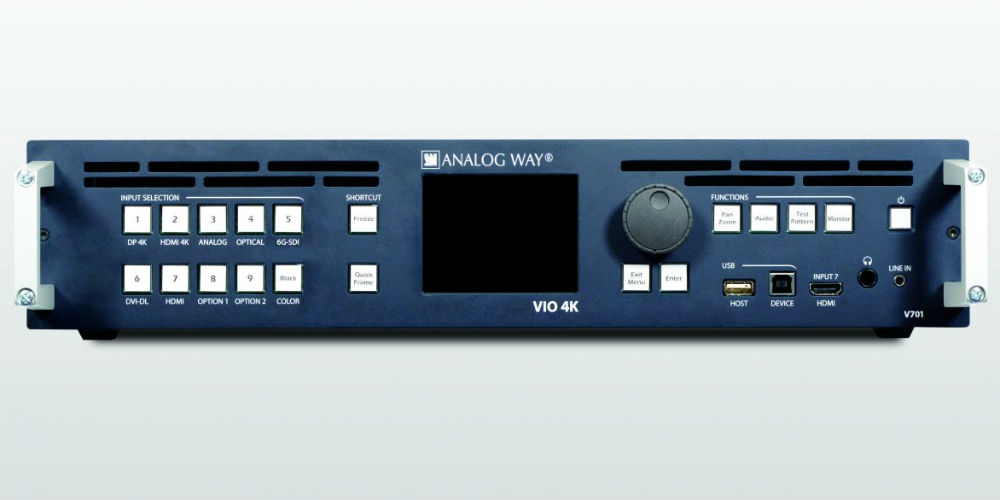 Analog Way wants InfoComm 2017 attendees not only to go to its booth (943) but also to five of its vendor partners, since its providing support with setup and peripherals. Above all, the manufacturer is highlighting VIO 4K, a multi-format converter it’s featuring in a three-screen Multi Display setup with a live [email protected] 4:4:4 demo; and its Ascender switchers.

The VIO 4K, Analog Way writes in a press release, is engineered to be road-hardened to survive demanding live event environments, it provides worry-free operation with maximum uptime and low maintenance.

VIO 4K features an exclusive high-quality processing engine to ensure crisp and natural images, whatever the source and the scaling level are while maintaining ultra-low latency processing as low as 1 frame.

The product includes three slots for optional I/0 interfaces to provide optimum versatility and double or triple the output capability of the VIO 4K.  It is designed to process a single source currently to all three outputs.

The latest firmware supports the [email protected] 4:4:4-DP 1.2 and HDMI 2.0 expansion card, which is now shipping.

More on Ascender and Other Solutions from the Analog Way InfoComm 207 Press Release:

Analog Way is pleased to announce that its powerful and versatile solutions will be employed by five vendor partners at InfoComm 2017.

SiliconCore, in Booth #4660, will use two linked Ascender 48 – 4K – PLs and an Alcorn McBride control system to provide scaling and source switching among four of SiliconCore’s 4K and 2K LED walls.

And Danley Sound Lab, in Booth #5774, will use a VIO 4K and Prima HDBaseT extenders to scale for LED in their audio demo room.

Back at the Analog Way booth, information will also be available on the Analog Way Academy, the company’s hands-on training facility in metro-Atlanta.