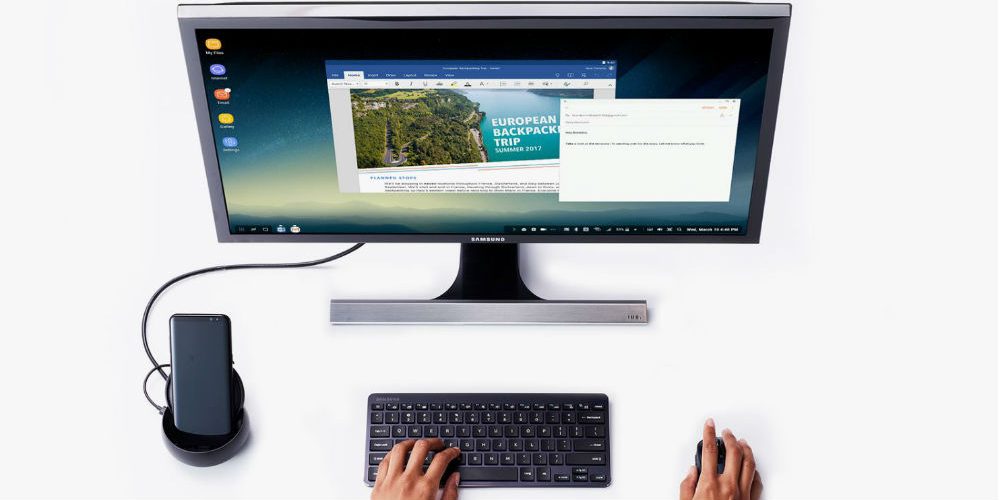 Samsung Electronics Co. Ltd. has released the Galaxy S8 and S8+ smartphones and an accompanying docking station solution, and announced a partnership with VMware Inc. to stream virtual desktops and applications to those devices.

Cumulatively, the moves seek to turn what has historically been an immensely popular but consumer-oriented mobile handset into a business productivity tool as well.

The end result is an Android-powered version of Palo Alto, Calif.-based HP Inc.’s Elite x3 device, which utilizes a desktop docking station and lap dock to turn a Windows Mobile-based smartphone into a desktop and notebook PC as well. The Samsung DeX’s specialized UI, meanwhile, resembles Microsoft’s Windows Continuum technology, which automatically optimizes a device’s interface based on whether it’s being operated in touch or keyboard mode.

“The ability to connect the S8 via a dock to a screen, keyboard and mouse is extremely impressive,” said Geoff Blaber, vice president for the Americas at global analyst house CCS Insight, in media comments. “Although Microsoft has done this in the past the performance of the S8 makes it a very compelling experience.”

The alliance revealed today between Samsung and VMware, of Palo Alto, Calif., extends the power of the Galaxy S8 and Samsung DeX tandem by allowing users to access complete Windows desktops and cloud-based workspaces in the office and on the go, and enjoy a consistent user experience when doing so.

VMware declined to specify when that functionality would reach market.

“VMware and Samsung share a common vision of helping Galaxy S8 end-users experience the full capabilities of the device while delivering an elegant end-user experience,” said Sumit Dhawan, senior vice president and general manager for end user computing at VMware, in a press statement. “Our expanded partnership will further enable business end-users to remain productive by delivering a unified digital workspace experience that offers continuity whether they are using the mobile device from a desk connected to a monitor, keyboard and mouse, or in the palm of their hands using touch and gesture interactions—elevating the experience of mobile workers to the next level.”

Coming on the heels of the disastrous debut last fall of Samsung’s Note 7 phablet, which the hardware maker had to recall after an extensive series of highly publicized battery fires, today’s Galaxy S8 launch is a critical one for the Korean technology giant.

Research data released yesterday by tech industry data consolidator ReportLinker, however, suggests that the Note 7 debacle may not significantly crimp sales of the new smartphone. According to the new study, 56 percent of U.S. smartphone owners are interested in the Galaxy S8 and 66 percent are very likely to choose a Samsung model the next time they upgrade their phone. That last figure has actually increased 15 points since ReportLinker’s last smartphone survey, which was published in October 2016 when the Note 7’s safety issues were a constant presence in the media.

This article was originally posted on sister publication ChannelPro Network.