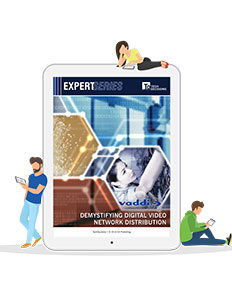 We are well into the digital age of video. Maybe some of you remember when our televisions were being replaced because they lacked a digital tuner, and subsequently also became flatter and wider. This wasn’t just because the video signal went from analog to digital. Consumers decided that a 16:9 aspect ratio was much more appealing than a traditional 4:3 aspect ratio. The technology behind these televisions became better, and therefore became flatter and lighter.

The action of changing an analog signal over to digital is not as complicated as one might imagine. Most video is captured in its analog state, unless produced by a digital source (i.e. computer generated graphics, etc.). It is either converted over to digital by the device it has been captured on or somewhere along the route to its destination. Analog signals are represented by traditional sine waves, and then when the digital conversion occurs, the sine wave is evaluated, and digital representations are made, as seen in diagram 1, and passed along in the form of 1s and 0s.

Learn what your options are for video distribution and the pros and cons of the various methods in this FREE report.