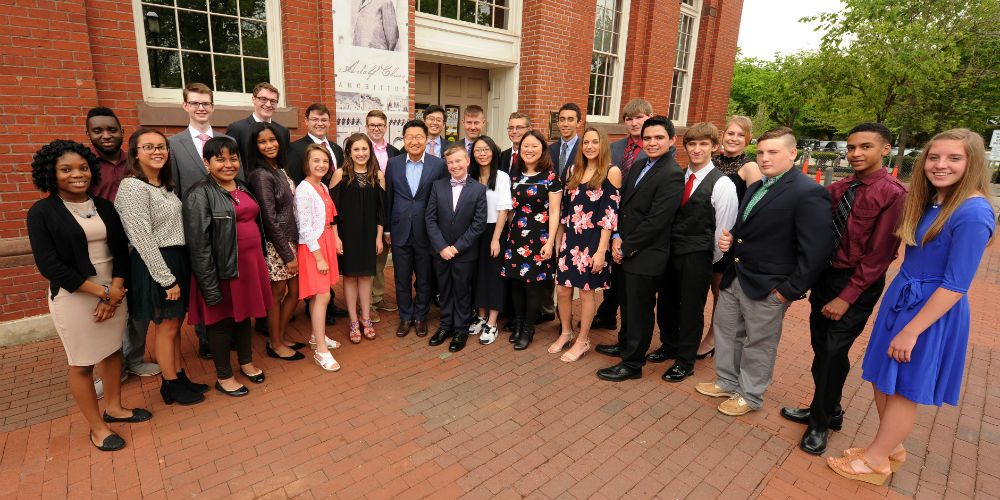 After months of researching, designing and developing prototypes, three schools have been named national winners in the $2 million Samsung Solve for Tomorrow Contest – a nationwide competition that challenges 6th through 12th graders to use STEAM to address real-world problems in their communities.

Tackling complex issues of student hunger, wildlife safety and overabundant pesticides in crops, the three national winners were awarded today after presenting their projects to a panel of judges during the National Finalist Pitch Event yesterday. Emerging from thousands of public school entries from across the country and being selected one of 255 state finalists (5 per state), then one of 51 state winners, and then one of 10 national finalists, Snowflake Junior High School in Snowflake, Ariz., Gering High School in Gering Neb. and The Secondary School for Journalism in Brooklyn, N.Y. ultimately advanced through these phases of the contest to achieve their 2017 status as national winners.

“In the face of challenge and adversity, students applied STEAM skills to create hope and possibility. From combating hunger and ensuring safety, to protecting wildlife and preserving natural resources, these remarkable young people have developed tangible solutions to problems faced by their neighbors and communities all over the world,” says Ann Woo, Senior Director of Corporate Citizenship, Samsung Electronics America. “Our hope for Solve for Tomorrow is to instill confidence in today’s youth and give them the tools to imagine and pursue a career in STEAM, and ultimately, take an active role in improving the world.”

The three national winners will receive $150,000* in technology products such as LED TVs, laptops and tablets. Additionally, each school has earned a $20,000 donation to a local nonprofit of their choice.

The three national winners were honored at an awards ceremony at the Eastern Market North Hall in Washington, D.C. today. In addition, Samsung recognized the contest’s other seven national finalists for their creative work to develop solutions for their respective local communities.

“STEAM education is a smart investment. The average STEAM job salary is 70 percent more than national average and STEAM jobs are growing twice the rate of other jobs. While we haven’t always made the investment at the federal level, I’m committed to do my part in Washington to support STEAM programs,” Rep. Pascrell says. “I want to congratulate all of the schools for your excellent work and progressing to this level in the competition. The students here today have a bright future ahead, thanks to their own ingenuity, family and community support, federal grants from the Department of Education, and investments and leadership from companies like Samsung.”

“It’s exciting that Samsung is running STEAM programs like Solve for Tomorrow because they are helping our youth tackle hard challenges today that will lead to the future jobs of tomorrow,” says Rep. Hurd.

While in Washington, D.C., students and teachers also had the opportunity to meet with and present their projects to their respective congressional representatives from Arkansas, Arizona, Mississippi, Nebraska, New Hampshire, New Jersey, New York, Ohio, Texas and West Virginia.

The Samsung Solve for Tomorrow Contest was created in 2010 to encourage innovation while addressing the technology gap in classrooms across the country. Each year, the competition inspires more active, hands-on teaching and learning among schools nationwide. Since 2004, Samsung has provided more than $19 million in technology to more than 1,000 public schools in the United States. Over the course of seven years, Samsung has received more than 15,000 entries, empowering youth to identify and problem-solve with the support of their teachers, peers, schools and communities at large.